Just because I said Marché was not nice. But it’s okay because I was undercharged LOL. I’ll explain slowly. It all started when I visited the 313 Somerset outlet with You You on 21 May (Tuesday). My first time trying the food there!

As usual I am playing cheat by referring to their online menu for food names and prices, but this time I’m not certain if I got it all right. What a pain… I’d take notes but I’m always too distracted by food and hunger. 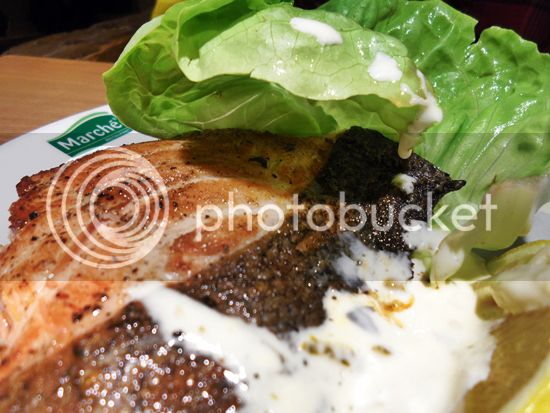 My porkloin steak ($11.20) with some pork sausage but I can’t remember its price. $5-$7? It was okay the first few bites but I soon got very sick of the meat overload. Then it got increasingly salty until I couldn’t take it and gave up.

Actually all I wanted was spaghetti (HAHAHA) but none of the pasta there looked good to me.

Ordered fried calamari to share because it looked good and everyone seemed to be eating it. I think it cost $12.90?
Unfortunately it was way too oily, and every piece was too big plus chewy like rubber band. Ack. Sauce isn’t good either.

Those who have been to Marché would know that their mode of payment is quite unique. You charge everything to this one card, regardless of what stalls you visit, and pay for everything at one whole shot before leaving.

Apparently their system was down that day so everything was handwritten instead. The people at each stall only wrote down what was ordered and not the prices, like they were expecting the cashier to have memorised everything. Lol at our reliance on technology…

Handed the cashier my card and in the end she only charged me about $12 (?) for my plateful of meat. I can’t remember the exact amount… but I saved quite a lot. Hehehe 😀

Still not as epic as the time I was at Northpoint’s Manhattan Fish Market with my family. The bill came up to $50.40 and I paid with my newly-made debit card. Maybe because it was the card’s very first transaction, but I later received a message from the bank that $5.04 had been deducted from my account.

Checked my receipt and realised the staff really deducted the wrong amount. Honest mistake which I am not going to bother correcting because I’m neither honest nor rich. Wow, talk about beginner’s luck though! 😀

Met up with Amos and Yixuan few days later on the 24th (Friday). I wanted to eat Japanese buffet but the whole Tarafuku at 313 Somerset had mysteriously disappeared. So they voted for Marché, which I said was not nice! They protested in horror and looked at me like I’d grown two heads! Pffft.

So I relented because I am a super nice person (again, they strongly disagreed and someone might have even laughed in my face… though the memories are vague and it might just be my writer side exaggerating).

They introduced me to Swiss Rösti, which is apparently what Marché is most known for. Basically it is like fried potato. The stall selling it had a super long queue (which was why You You and I didn’t try it previously).

Served with sour cream at $6.40, but you can pay more for extra toppings such as various sausages, sunny side-up ($1.70 which is a blatant rip-off), smoked salmon, mushrooms, etc.

Yixuan’s mushrooms in some creamy sauce… and holy crap, they are so fudging good!!!!
If memory does not fail me, it costs nearly twice as much as the rosti itself. And I can see why.

Can’t believe I couldn’t finish my rosti -_- Gave the rest to Yixuan. Fine, the guys win, it was good (as well as super sinful). We wanted to have crepes for dessert but everyone was too full. Ended up lazing on the carriage there like little kids. Will post photos when I get them next time 🙂

Yixuan shared his bright idea about how we should get a large group of people, pay for everyone’s meals on one card and then pretend to lose it. Because you have to compensate $100 for every lost card LOL. So just accumulate more than that amount on one card and everyone chip in for the $100 compensation while returning the rest of our cards charge-free.

Watched The Great Gatsby with You You and Fast and Furious 6 with Amos our meals respectively.
So yes… now you know all about my Marché experience 😉