… more on that later.
Gonna start by blogging about the day first so read till the end! ^-^

My day starts at 7.30am today (in case you are so dense, it means I woke up at that time). Reached Khatib MRT about an hour later. Was waiting for train when received a call from Hariz saying that the class at 9am is cancelled!! T_T

Between walking back home, I chose to go school and meet my friends anw 😀 because most of them live so far away, they definitely would be on the way to school or reached already. Hehehe!

Next class was at 12noon -_- I didn’t bring my laptop though because I am too lazy. Try not to bring it unless I need it for class.

Plus because the Internet connection is the school’s public network, I don’t dare sign in any of my accounts. Few days back, some of us signed in Twitter and we realised that people can get into your accounts and vice versa.

If not I will surely bring so that I can blog in my free time!

Wooo I love the cafe in the school library 😀
Was with Geraldine, Darilene, Dian & Judith. Awesome people ♥ !

We had breakfast!!! How rare – when was the last time I even ate breakfast?

Actually there were 2 sandwiches in the box but I shared with Geraldine :}

The inside very nice but the edges very hard ._.
{forgot turn off flash oops}

Ahhhh! Yummy much 😀
The other Cs are probably gonna say I love myself whipped LOL

I look very big in this jacket hahahah

Tutorials after that.
Ohno getting our ICA assignments for all the various modules already 🙁
Gonna do my besttttt!

Hopefully there will be no conflicts between group members ._. And hopefully I get group members that I like. Okay life is not all rainbows and bunnies, I shan’t be unrealistic.

2 new classmates today! So now my class got 29 people in total, exluding foreign students. The Korean guy only attends Creativity & Thinking Skills while the French girl comes for Digital Filmmaking only.

One of the new students (both are females) live in Khatib!!! And quite near me also 😀 hehehe. And she joined my group for one of the ICAS ^-^ tomorrow meeting her at mrt station then we go school together!!!

So now I know my class, including me, got 3 people live in Khatib area. Yay! The other one is Andre. And he uses the same laptop as me and Sharifah. Hahahahah.

Had McFlurry after school ^-^

Last photo which I forgot to poast last week – 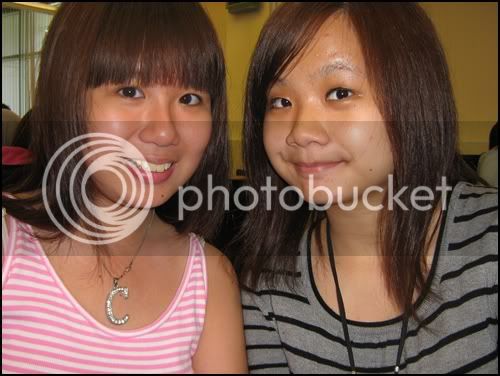 With Jasmine! Nonono this is not taken today..

I wore new shoes today. Heels, really. The flat kind, not the stiletto sharp kind.
I know I may be insane sometimes but I am not that insane to wear stiletto heels to school laaaa!

And now I have blisters on both the backs of my leg, you know that area where the shoe keeps brushing against your skin and your skin tears? Hahahah. Sooo pain. Even 6 plasters didn’t help. Owww.

The price of vanity.

Don’t care lah, I love all my shoes even though some of them like to kill my feet and skin. But all look so nice, I like ^-^ I call them my “suicide shoes” 😀

Had some sushi just now, not long ago, in the middle of drafting this poast 😀
Wheeee satisfied my craving!
Okay I did not eat everything in the picture lah, shared it with my brother & mother.

I had a sudden craving for sushi. Told my mom and surprisingly, she never nag me for wanting to eat sushi even though I’d just finished dinner -_- Even ask me go take money go downstair buy.

I waited till 9pm then I went down NTUC to buy because after 9.30pm, all the sushi will be at half-price! Cause you know, sushi can’t be kept overnight so they have to sell it all.

So happy that my craving was satisfied. I’ve been especially craving for the octopus sushi (middle of picture) for a long time and I was happy maxxx when I saw that there were 4 boxes of it left and I grabbed everything. Ate 3 of these boxes HAHAH (L) 😀

It repulses me… I find it very off-putting.
Why be something or someone you are not?

I know it’s normal for people to want fit in. But don’t go all out and seem so desperate to fit in can? I find it irksome. Just be yourself and be natural like normally lah, real friends will like you for who you are.

Even online – I don’t like bloggers who are Person Type A on their blogs, and Person Type B in real life.

It seems that in every school I attend, there seems to be at least one such person. Primary school, Secondary school, Poly.

Gosh, get a life.

Okay very tired from blogging and I’m lazy to elaborate 🙁