Whoop! Record time for blogging about so quickly… about yesterday! Best day ever with You You so here it is while everything’s still fresh in my head 🙂 went to school in the morning for print meeting and coincidentally there’s a direct bus from there already.

The plan was to just explore Upper Thomson Road (known for neverending stretchfuls and rows of food) and see what looks good. Never actually been there much before other than filming so everything we ate that day was our first try 😀

Saw pictures of Little Pancakes online and it looked awesome so we decided to head there first! Funny thing is we were trying to find the shop after alighting the bus but couldn’t, even after asking other people and using Google Maps. So we took a cab but the uncle didn’t know where either even though I gave him the address.

He said it’s most probably just in front, he will drive slowly and let us look out for it. Omg it was hilarious because it was seriously just a few steps more ahead and I don’t even think the meter jumped?!?!? LOL but the uncle was so nice!! Instead of $3, he took only $2 and said nvm, discount. HAHAHA oh my gosh.

Both sets are so, so, so gooooood!!! Everything goes so well together 🙂
Oh every set comes with butter and maple syrup too!

Personally, being a freak for carbs and meat, I prefer the breakfast one. Plus I am not a fan of chocolate like the average teenage girl to begin with. The taste and texture of everything is just perfect other than the potato salad which I thought was slightly too salty.

We polished off everything other than the vegetables muahaha. Actually halfway through, I felt quite stuffed already even though I didn’t eat anything before coming. Weird. I think it’s something about pancakes – even Mac hotcakes, I have never been able to finish more than 2 out of 3 since young till now. I am a very insatiable person with a (over) hearty appetite normally hehehe.

Only downside was the nutella set came first, then the breakfast set took awhile to come. I don’t like!! Either you come together or come quickly!! Because the ice cream will start to melt.

Moving on!! We were now craving for something  of the hot and salty variety… agreed on spaghetti!!! Went across the street to look at Fat Boys but all they had were burgers. Whipped out my phone, Googled “upper thomson spaghetti” and “LongHouse Best Western Pasta & Grill” came out. And wouldn’t you know it, LongHouse was just right beside were we were 😀

You You’s sausage spaghetti ($5.50) which I tried. You probably can’t tell from the picture but the sausage, drenched with mushroom sauce (with bits of mushrooms), was huuuuge. Like fat, jumbo-sized O_O

I love spaghetti like crazy so I’ve tried from many places but Pastamania has always been the best nicest to me. But this is so much better than Pastamania!!! Cheaper (their seafood marina which I always order costs $10.90), more generous, and tastier! 😀 Wow, highly unlikely I’ll ever go to Pastamania again.

Didn’t try the other food at the hawker center but they were all of standard prices. I was expecting them to all be slightly higher than average, like Chomp Chomp at Serangoon. But nope! Like a regular hawker center 🙂

Walked to Thomson Plaza to burn fats after that hahaha. My digestive system is really efficient. More than half the time after I finish a meal, I have to visit the toilet. This time is no exception. But it’s a good thing so I’m not complaining 😛 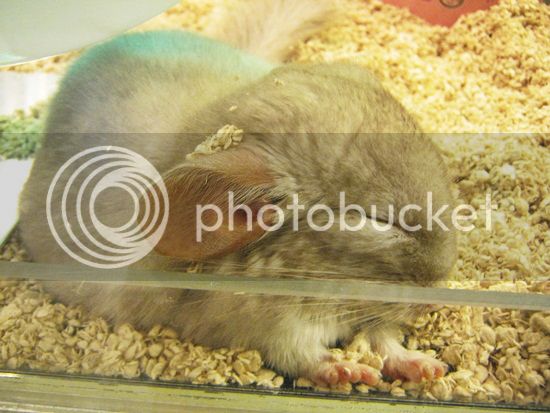 Chinchillas in a pet shop omg I never knew they were this cute!!!!

At around 5pm, we decided to move on to our next destination! Dessert at Salted Caramel! We jaywalked across a pretty wide road, got stuck in the middle for ages, and realised that it might have taken us lesser time to walk and cross the traffic lights properly ahahaha

Salted caramel, earl grey, cookies n cream flavours ($5 for 2 scoops) 🙂 The earl grey ice cream was heavenly. Though I have never tried earl grey ice cream anywhere else before but still. So refreshing and yums! The rest were just ok. Have had better cookies n cream (sufficient cookie bits, but too creamy and milky) and while I have tried salted caramel ice cream anywhere before, the salted caramel milk tea from Artease was a lot better. Is it fair to compare this way? HAHA.

Also, I was surprised that they didn’t have a lot of flavours. Less than 10 (I know they rotate everyday but still). Scoopz has 30 different flavours a day and I think their ice cream is nicer + more unique. Cheaper also!

Went to the bus stop and decided to hop onto the first bus that came and let it decide our next destination. Ended up going shopping at AMK Hub 😀

Such a fun, adventurous and perfect day! And none of the above 3 places we went to were crowded. It’s like our very own customised full-course meal we both agreed that if we had to pick one, the pasta was the best 😉 Definitely going to do another round with different places another time! Maybe 4 courses HAHA. Claimed OT leave on the right day yay ^^

And yes when I went home I binged some more for dinner lolol.
Can’t wait for the next time we meet again ❤ Lucky because I feel so blessed by all the people around me, I thought of that Jason Mraz + Colbie Caillat song and I’m currently reading a book with the same title 🙂