A day in the media hub

Crazy busy yet productive and fun day! With loads of drama as usual.Personally I feel quite glad that I am getting along with all those I used to have conflicts with and that we are all able to let bygones be bygones. Because thinking back, all those things seem quite silly now but at least we learnt from them.

Some upsetting stuff today till the extent that I had to run to the toilet because I can feel my tear glands starting to get sensitive but whatever, not gonna dwell on it. I just feel very indignant because Azhar has been having a go at me since Monday zzz. Right after I came back from filming that day, he called me over and bombarded me with questions.

“Where did you all go for filming?” “Why your group ALWAYS need so many batteries when filming?” Blah blah blah then he just brushed me off with an annoyed “Nevermind nevermind”. Can’t even be bothered to lay out my arguments because I don’t think my group did anything wrong at all in this case.

Then today, “Where is the equipment manager?” I raised my hand and off he went, “I have one paper here and one paper there *point point point* stating the dates you aren’t supposed to loan out cameras, if not enough I can do a big one for you. Unbelievable! *nag nag nag*” Whatever manszx.

Meh, I was sad (besides the email) only because Ms Ang said to me that I shouldn’t have forgotten about the dates because I’m the equipment manager and I feel like I let her down or something. Because she’s always been so nice. Everytime we go out filming, she tells us to be careful and takecare. Last time fighting over lack of equipment, she sided us and told us just to take what we need.

Thank you everyone who tried to comfort me and said I’m not to blame :’) Dear Nyna even brought me to the graduation reception to get coffee ^^ Hahaha so funny because we along with Kendy went through the back door and then Nyna and I started piling up our plates HAHAHA. The menu this time was all pastries and got this fried prawn roll or something damn delicious!!! Juicy, fat prawns… ❤

It’s funny because a lot of our classmates were there too, all helping themesleves to the food too 😀

Also called Geraldine to whine to her and ask how she’s feeling. Passed my phone around and it’s nice to see everyone all missing her and being concerned 🙂 Then Mark said, “Wait, I pass the phone back to Vanessa” but he passed it to Ms Ang!

After that we went to record stuff for Crowbar and the bunch of us (Qiya, Nyna, Nicole, Kendy, Mas, Mark, Brandon) were in the small VO room. Thanks guys for helping! 😀 so funny, I swear! As predicted, Brandon randomly stopped mid-sentence to start one of his laughing episodes with his voice all shrill. “EEHEEEEHEEEHEEEEHEEEEEEHEEEEEE!!!”

And as we all know… laughter is infectious.

Speaking of VO room, earlier on before all the drama, my group was inside trying to record but we ended up talking. Nyna mentioned Mitsuko from Battle Royale so we tried to re-enact this scene: 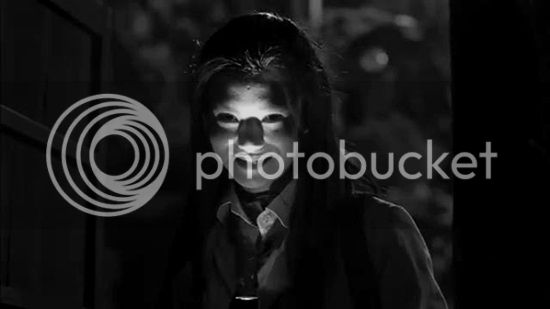 She looks scary cos the shadow made her nose all weird and I added a B/W layer.
But both the character and actress are very pretty!

We switched off the lights and Qiya used her phone’s torchlight to do the exact same action as above. Looked into the glass and there was a double reflection of her face all white and creepy-looking. Everyone started screaming, Nyna ran to the corner of the room, Qiya grabbed my arm, I dropped my phone and had to fumble for the lights. Epicly priceless!

I think 3 of us all have potential ghost-like features. My long hair, Nyna’s big eyes and Qiya’s fair skin hahaha. Moments later Brandon popped his head into the room and said he thought he heard someone dying LOL

Have I mentioned that today Qiya baked us peanut butter and chocolate cake? 😀 Yumsss. Now I feel bad because I can’t bake anything! But I feel so blessed, seriously 🙂

Anw, spent the late afternoon rushing work – editing audition video, editing Crowbar audio and preparing scripts and questions for the two interviews we have lined up for tomorrow. So much to do but I can’t help but feel happy and thankful for my groupmates. Mark said we are very lucky because it seems like our group has the most fun 😀

But sometimes I stare at the Mac screen, make all the tiny cuts, hear the same audio repeatedly nonstop, until I feel so dizzy and then today there were the juniors and secondary school visitors, thus the hub was soooo noisy which made it worse. Ack.

I miss lunch and breaks with all 4 of us!

Other things I’m extra happy and thankful for ever since TEP started:

Bless all the good and beautiful things in life, no matter how small!
Nothing can ruin my mood if I don’t let it 🙂