Friendship is the best ship

Initial plan was karaoke but we changed plans last minute because Gerry was unwell and couldn’t make it but she’s the best singer among all of us and also the one who loves karaoke the most! Anyway I had flu and my throat was a little sore sooo. Decided to stick with the safest option – lunch and movie in town! :3

Like what Nina Dobrev tweeted, Crazy Stupid Love was crazy, not stupid and I absolutely loved it :’) I think it’s one of the best comedy films I’ve ever watched! Ryan Gosling being in the movie too helped a lot of course ^^

Some parts were just plain hilarious and I laughed throughout most of the movie. My favourite scene was when everyone met each other face to face then chaos ensued and a brawl started. At first I was like nooOOoOooOOOooo but then later I was just THIS IS SO AWESOME HAHAHA.

Can he get any cuter?

OMG HE IS PERFECT ASDFGHJKL *_*
He srsly looks like an older version of Tom Felton esp with hair all gelled back like Draco Malfoy!!
And my favourite cutest moment… :3

Went to shop around after that and I swear Darilene and I are very bad influences on each other :@
We bought 4 bottles of nail polish each even though we both already have so many at home. Hahaha but I guess there isn’t really such a thing as “too many” 😀 want to guess what colors I bought… Actually no need guess also know.

All my favourite colors lololol. I usually only paint these few colors to match my clothes and shoes… But it’s justified okay!! I don’t have pure black, white, that shade of pink and that shade of silver at home… hahahaha okay wtf am I saying.

Dian bought a pretty white dress from New Look so yay we all bought something!!! 😀
I tried on the same dress but I ended up looking like I hail from Ancient Greece LOL
Went to om nom nom after that! Mmm takos!! Shared this Japanese omelette with Dian too (y)

Feels very incomplete because it’s just the 3 of us…

This is like the best group photo out of all 😀 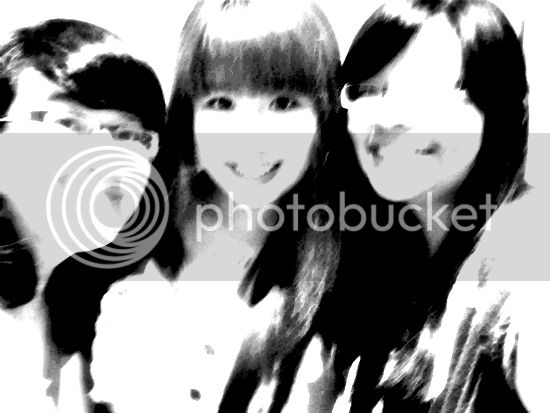 My bag very unsightly I know

Wore proper high heels because it matched my dress and rarely are there good opportunities to wear those heels. And some shoes if you don’t wear them often enough, they will spoil and split apart etc sooo decided to be stubborn anyway despite knowing that I’ll be doing a lot of walking. Brought slippers just in case though and Darilene told me to just change into them because my feet were hurting so bad. But the vain and stubborn side of me just refused to listen -_- rather suffer the consequences and take painful steps than have a mismatched outfit. Sigh my priorities…

Sigh I feel like time with some people is never enough no matter how often I get to see them or how long it is whenever I do. It’s really hard to find true friends that stay with you (especially in my stupid class) even during hard times, people you are so comfortable with that you have no qualms about being yourself in front of. People who know the real you. Sigh really hate how time passes so quickly when I’m having a good time!!

Anyway while walking around, I was being random and telling the girls that I felt very lucky to have known them, out of so many people in class (like why did I get awesome friends and not the backstabbers). Dian was so cute because she said, “Why, what do you want from us?” with that suspicious look (as a joke) like I’m being nice because I have an ulterior motive xD

Hmmm went out like nearly everyday that week but I don’t have pictures so I’ll just be briefly blogging about them together in one simple poast for memory’s sake. Most probably will not be poasting the permalinks to FB and Twitter so check out the homepage yourself every now and then if you are interested in minor updates 🙂