The total number of hours I’ve spent sleeping over the weekends is definitely more than 24 so it’s like I wasted a whole day… hmm nothing new. At least when I sleep, I don’t have to think about anything else and I don’t feel like shit. How is it that I still feel so horrible after so long… It’s not like I don’t try? It’s not like I enjoy feeling so miserable? But seriously everytime I think, “This is it. Bad days are over. I’m finally starting to feel better,” I’m proven wrong, something or someone sets me off and I am upset all over again. Which makes me wonder I even bother trying, and why for a moment I even dared think/hoped that anything would be any different.

Well anyway it’s been another bloody week, more or less much the same. Only good day whereby nothing upset me was Tuesday. In fact the day started out so awesome, I was afraid that everything would come crashing down suddenly, like it was too good to be true.

So that day I slept in till about noon and decided to give the 2pm lecture a miss. Because I was procrastinating so much that I would definitely be late anyway -_- Then when I was still idling about at home, I heard that the lecture was cancelled and a lot of people went to school early for nothing :3

Anyway although I was a bit hesistant about watching Harry Potter and The Deathly Hallows 2 (the last movie in the series I watched was Chamber of Secrets and I’ve never read the books hahaha wtf filthy muggle much) with the babies the past few days, that day I was just like, “Okay lor let’s all go” because that was how much of a good mood I was in that day. No work to worry about and all. So we were off to AMK Hub’s Cathay, all 4 of us! 🙂

Okay to be honest I’d expected a lot more from the way everyone talked about it… I guess this is what happens when you never followed the series. But everything seems glorified and more epic on Tumblr and GIFs than the actual thing. Is it just me? [SPOILER ALERT]

Okay quite nice but I think I missed out too much in between… Need to catch up soon! I did watch Order of The Phoenix but I didn’t really understand nor remember it. Still love the first 2 best 🙂 Felt bad because I kept asking Dian questions whenever I didn’t understand a scene hehehe.

Went to walk around AMK Hub with the babies after that! 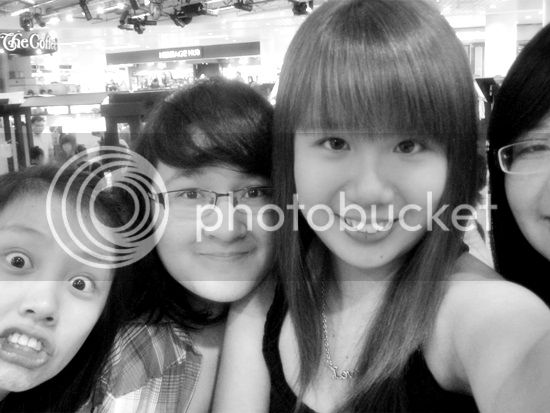 Gerry’s face looks like the frontal view of LOL meme!!! (Google it)

After messing around in the shops we were just sitting there eating meatballs and takos and everything was just perfect and nothing hurt ahhhh just wish I could stay in that moment. Forever. Finest I’ve ever felt in an awfully long time.

Life went back to meaningless and monotonous after that.
Some pictures from Thursday after I finished my work and went to disturb Darilene hahahaha. Damn funny, I remember at one point Mark wanted her to do something and she was trying to justify why she needs me to go with her :’D She used me as a guinea pig again!!!