Dinner at Just Acia with Ze Huan, his treat muahaha. Because I always help him to edit his essays before he sends them in to wherever. Last time was some really loooong essay for his NYAA gold award and nowadays it’s all for the universities he’s applying to. He just sent me another 2 essays today. Actually it’s hardly any work and he treated me Astons last time already :S

Hiya why are some people so proactive and passionate about their education/future???
I hardly know what I want.

This is actually my first time eating there and I asked what’s good so he said if I like spicy food, I should get this spicy chicken set. So I did and then had a bite and floated to heaven. Omggg it is so freaking goooood.

Ze Huan’s fish which I had a bite of but it’s nowhere as good as the spicy chicken!!

You know, I’m quite amazed because the ice cream and drinks are all free flow so you can just help yourselves to as much as you like. But the variety is like seriously wow!!

There’s vanilla and chocolate soft serve on its own, then there’s the mixed one above (you press from a machine), and also the regular ice cream that you scoop yourself. You know, all those peppermint, ripple, yam flavours etc? Then the drinks they have one machine for regular ones like pepsi, root bear, sprite etc etc. Another machine for lemon/apple/peach tea. Another machine for the Nescafe frappe (the one KFC has) and some other stuff. And one more just for hot drinks!!! And they have like 6 or 8 different kinds of hot beverages omg. Teh tarik, cappuccino, etc etc.

And the total bill came up to just $16ish which is so reasonable plus the food is so yummy. and choice is so diverse. No service charge or GST! Defintiely going back there!!! Can’t believe it’s just right beside Dhoby Ghuat MRT (and I’m always at Plaza Sing with the girls not knowing what to eat) and I never knew it existed.

Went to Kinokuniya after that and the rest has been mentioned in an earlier post. I ended up spending $100+ there omg T_T the 2 books I wanted the most (RFAD & WNTTAK) turned out to be the most expensive but oh well!! Maybe I should sign up for a membership card… I wanted to last time but then I thought it’s not like I go there very often. But when I do go… 😀

Anw they have a lot more books now and that makes me happy. I just wish their quality of books was better and they had more copies to choose from. I don’t get why nearly every shelved book is unwrapped (hello creases, stains and dog-eared pages…) and there are usually hardly any other copies to choose from.

Went karaoke with the girls again!!! 😀

Erm, thanks to the Nescafe frappe as mentioned above that I had, I couldn’t sleep that night so I only slept for 1hr+ before meeting them -_- took a very short nap halfway through singing in the room while the rest carried on and it really helped though. Darilene said I lie down everywhere I go 😀 can add falling down to the list also hahaha.

Sang (and shouted) for 5 hours straight!!! And like last time, we still had 10+ pages of songs left in our playlist when our session ended but we didn’t even sing Chinese songs this time?!?!?! BUT SUCH IMMENSE FUN.

Dinner after that! No photos because I forgot. Had this really nice western food which is quite similar to Astons in terms of price and menu. Aston has better fries but I hate their colesaw and this one had really awesome colesaw. Oh and the iced lemon tea (from a different stall) is one of the best I ever had! Not sure of the exact location but it’s across from Chomp Chomp I think. Also had really yummy tau huey from Chomp Chomp!!! 😀

Sigh, so reluctant to get up and leave and travel home -_- #fattypains Was quite sad when everyone finished their last bit of food because it meant that we had to go soon. There is just something about sitting down and chatting over good food which is why we always have lunch together in school together.

Walking to the mrt and we passed by a bus stop… 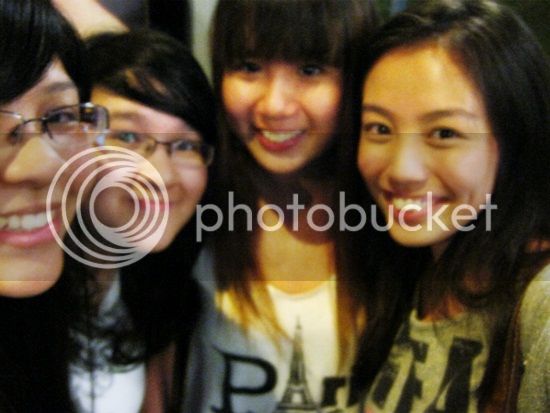 Actually going to watch The Hunger Games together tomorrow o m g.
Reviews everywhere says it lives up to its hype so yay! 😀 plus it’s 142 minutes so FUCK YEAH.