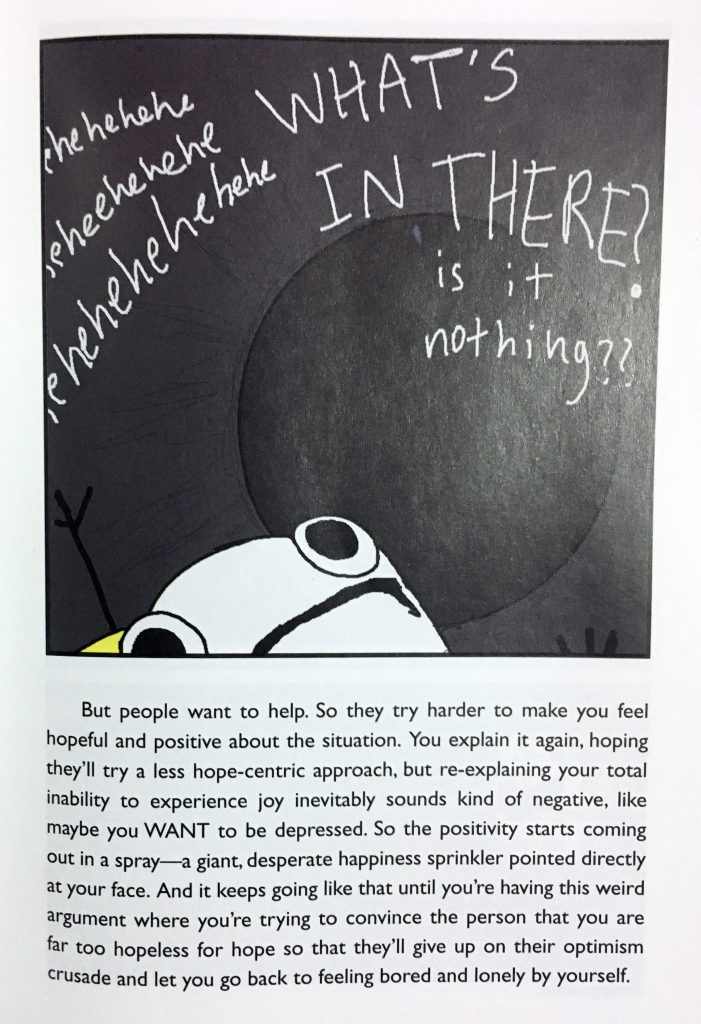 Most relatable page from Hyperbole and a Half, which is a book that’s both sad and funny and comforting at the same time. It’s one reason why I don’t like to share personal stuff with people and if I do, I’m highly selective of who I tell. Sometimes, we don’t always want a solution or advice — we just want you to listen.

Buzzfeed has the audacity to suggest that I am emotionally unavailable!!!! Well, to be fair, they are not wrong ?

I have always known this and people have also said that I am emotionally reserved. But what I feel is… do you deserve or have you earned the right to see me emotionally vulnerable? Like yes, physically you can do whatever you want because I cannot stop you. People take and take and take even when I do not consent to give.

But there are some things you will never be able to take or reach. You cannot rob me of my words and I will never reveal my innermost layer or lay my true emotions bare to you. Call it self-preservation or survival instincts ?

Ok I don’t know why I always plan on being upbeat but end up saying depressing shit. Recently, I’ve had strangers telling me that they read my blog and find it interesting / well-written / funny… I find the stuff here depressing and cringey and would rather you all read my news articles instead ? but thanks for the encouragement!!!

And I feel quite okay now, though I don’t know if it will last (obviously I hope it does). It was just a lot all at once in the past two weeks or so:

I wrote about how it got flushed away earlier. Kinda sucks because it was a minor inconvenience but everything has a silver lining. I got to take a new photo for my replacement card after a week and it’s a much better pic (probably cos I lost weight) ? Not the best but an improvement for sure.

So not used to seeing 1 cage instead of 3 in my living room ? The white hamster died of old age (ripe 2 years 7 months) so it wasn’t that bad but my brown hamster suddenly looked unwell on two Sundays ago. I rushed down to the vet, got turned away because they were closed for dinner, then rushed to a second vet clinic (Grab fares $$$).

There, she went downhill even faster and they had to put her on oxygen but she collapsed. CPR and adrenaline shots didn’t work… didn’t even get to see her for a proper last time before she left and it was all so sudden ???

Seriously I am going to take a break after my last hamster because I am very tired and the grief + guilt + self-blame really sucks.

I WAS NOT READY TO SAY GOODBYE.

My cough is so long-lived that my office doctor referred me to take an X-ray. Haven’t gotten back the results but I don’t think there’s anything wrong. My coughs are always very long-lived (though this is the longest) and I cannot commit to medicine so I tend to give up after a week. I also like aggravating it with cold drinks.

Some other stuff happened and it was a combination of things that became a big thing, so it was a major stressor that made me extremely tense and upset and anxious and stressed. I feel like most of it was emotional because for the most part, I am actually fine.

I got so upset that I burst into tears in front of CK during lunch last Friday. I hate letting people see me cry but I couldn’t help it. Thankfully it lasted for only a minute or so.

All of these happened at a time when I had a lot of extra work so it really sucked. There was one day when I slept at 4am → woke up automatically at 4.30am → went to the clinic → got told I was having a fever that I didn’t know about → declined an MC → went to do my interview → went to 2 hospitals. So not fun.

I should have more faith in myself because somehow I always make it through even when I don’t think I will. For here are the small victories, small as they are:

Feels like it’s been a month of loss but at the same time, I am infinitely grateful for the friends who didn’t probe because they know I would tell them if I wanted to, who listened and allowed me to mope and be cryptic and depressing despite not knowing what’s going on, who didn’t push the issue and just let me be, and whose presence alone was a comfort.

There is still an epilogue I would like to write for a certain narrative but maybe next time.