Sometimes we take these little trips to get stuff done for Print. Most of the time it’s me, Muz and Qiya. I wouldn’t say no to any opportunity to leave the confined walls of the media hub and its stale atmosphere, breathe some fresh air, see the sights. Photos from such times with them! 😀 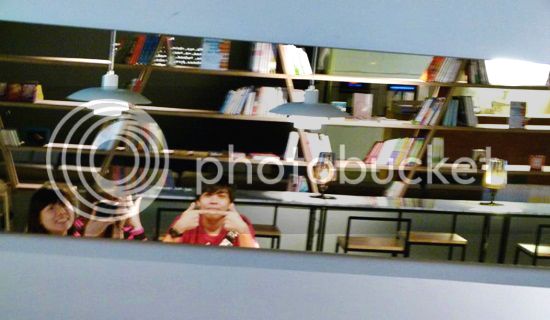 Don’t fancy staying in school that much but the good thing is OT claim.
Thank goodness I barely touched my extra OT hours and had enough to deduct from my horrible lateness, or else I would have to come back to school and pay off. Wtf not sure how it’s possible but apparently I managed to accumulate 5 hours of lateness in just August alone.

Break time in school
Cone, stick, cup and me looking like I’m having the whale of a time

Escapism was one of the articles I wrote as well. Wrote 6 in total for the whole stopover. Not really that proud of any and I think I kinda lost interest by the second issue. Can’t say that I preferred print to production. Both had its ups and downs. Certainly didn’t feel like Print was more relaxed. Not sure if it’s because there’s always some unforseen crisis, or days just passed faster because TEP was coming to an end, or because I was preoccupied with the awards thing during the final week. Then again, I did have an uber long weekend 😀

Anw, my Internet was done for 4 days >:(((( It’s fixed now and it better stay that way. 2 days ago, the technician came to fix it and it was working for 5 hours before it stopped again. And during that 5 hours I was sleeping, ugh. What will I do without the Internet?