Omigosh I’d forgotten about this poast until I went to Photobucket to look at the photos and try decide what I should blog about today. Hahahah okay I know I am slow because this was due long ago. One month, in fact.

Details are hazy but I’ll try my best.
Orientation took place over 2 days and “Mission Possible” was the theme.

The very first classmate I met was Mark Juan. He was super quiet and didn’t seem like the conversationalist type. Who would have thought he’d turn out to be the class clown and noisiest person in class?

We had 3 OGLs actually, but 2 of them always disappear.

Both all very chio 😀

My class leaving the auditorium for lunch

After lunch, Derrick the photographer taught us to play this Polar Bear Game.

Kinda fun but I am lazy to explain. Basically the polar bears kill villagers every night. In the morning, we have to discuss who are the polar bears and try to kill them off. We don’t know who is who and usually we end up sacrificing an innocent person instead.

Mark Wee trying to save himself – if I remember correctly, he really wasn’t the polar bear or tribal chief i.e INNOCENT

Closing our eyes and waiting for daybreak. The polar bears have already woken up and decided who to kill, now they are back sleeping too.

What was once a huge circle is now left few of us survivors only, those at the back all killed off already.

Whenever it is revealed that we have sacrificed an innocent villager, I start to laugh hysterically. Mairah had to tell me to relax. But so funny lah, always kill the wrong people.

And in that particular round on the second day, I was one of the last 3 surviors, along with Nurul and Nyna!!! And there was still one polar bear left! I know that I am definitely innocent… so the last polar bear was either Nurul or Nyna.

They voted to sacrifice each other. So the deciding vote was in my hands :O
Guess what? I chose to sacrifice Nurul. The polar bear was actually Nyna. Oh shit xD

Went to meet our PEM (something like form teacher) after that.

More bonding games after that.
One of them was this Island Game which requires a lot of running.

You have to be in groups of 3 and if someone else joins your group on this side, the person on the opposite side have to run to find a new group/home. All these while someone is the catcher and trying to catch the person without a home. Something like that lah, hard to explain.

Unglam shot of me again 🙁

Actually I have unglam shots of almost everyone else too, but I shall be nice and not post them up without permission ^^

The second day we played this too, and somehow the people who are being chased are are always the same ones. Including me -_- I even ran until I was quite far away from where everyone else was. Sooo breathless LOL

Back to auditorium for briefing

I had fun :}
Classmates and OGLs are all wonderful.

Even more insane and fun and everything else than the first day!
But even less people came 🙁

Water games was the very first thing. And our class got to play the wettest game first too -_- but it was fun! 😀 3 water games in all and we competed with another class, and we lost 2 of them hahaha.

But the only one we won, we got to chuck water bombs at them as a forfeit ^-^

Lunch as a class after that – 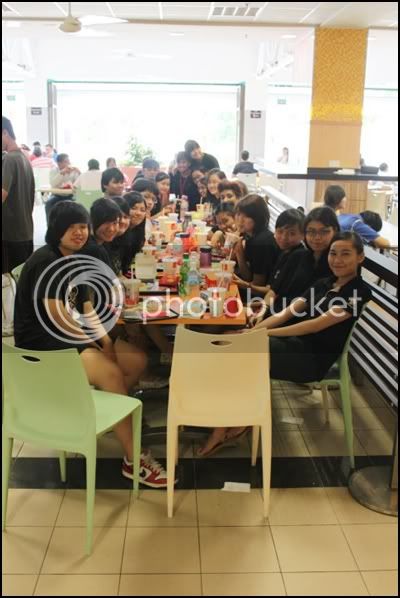 Resumed with games and all very gross one.
INVOLVE TOOTHPASTE LEH EWWWW!!! Got ketchup also…

For one game, we had to use different parts of our body (depends on whatever card you got) to paste a gloop of toothpaste to the person next to you. Got neck, thigh, shoulder, etc etc.

I was so happy when I got “arm”. Had to use my arm take toothpaste from Jasmine’s shoulder and pass to Judith’s neck. You get the idea.

Another game, the other class got to draw on our faces with lipstick. Lucikly the guy who drew on me was kind and kept to just my cheeks like I told him to.

Gross maxxx.
Toothpaste is a daily necessity but it is disgusting in every way possible okay!!!

Random guy dressing up as nerd and saying he is here to provide entertainment O.O

Can you spot me?
Because I can spot a lot of my classmates but I just can’t spot myself -_-

Then we were told to move to don’t know where to take more photos in batches?!

Notice the OGLs at the top…

I’m in the middle, on your right, third person from the edge

Look what the OGLs are doing – pouring water down!!!

Actually I was dry already, now I got super wet again because some of the water landed directly on me T_T

Then it started raining heavily right after.
We were allowed to change into our orientation tees and prepare for “talent-time”.

In case you are STILL clueless about what SBM stands for, it’s School of Business Management. 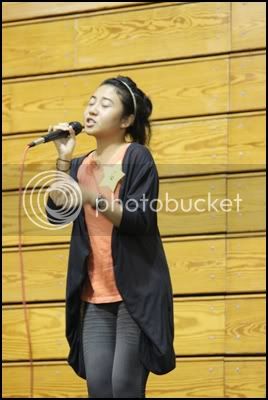 She sang Justin Bieber’s Baby and sorry but I thought she was quite horrid. She couldn’t sing the high notes and I thought her singing was quite flat. Especially the chorus.

But, she won the third prize because compared to other contestants, she is considered all right.

I think he absolutely deserved the first place 🙂

Mass dance and loads of cheers to end off orientation 😀

Took some group photos before we all left –

We all thought Fritzl was just another classmate… but later he revealed that he’s actually a Year 3 student who joined us to accompany his cousin, Natasha (another classmate) for her orientation. And all the OGLs actually knew as well. Wowwww.

The girls!
So many people not here 🙁

Some of the guys

Not even 20 people turned up!

With the other Media Studies class & OGLs

Guy in white is Derrick the photographer

Wooo so overall, orientation rocked 😀
I think our class is considered quite bonded (((:

Wow what a long poast, I spent hours on it!
I apologise for how long it took to get this up, but please understand that my life is not 100% blogging. In fact, I have LOADS of ICAs due in 2 weeks time. Hurrah.

Photograph credits
Majority were taken from Derrick’s Facebook; thanks Jasmine for lending me her account to save these pictures. A few were taken by me, and some by other classmates.

Random: Loads of Nokia E63 users in my class, like at least 5? I’m the only one with the white one though! :DDD