Some days I surprise my socially awkward self by being spontaneous about going out with people I’m not exactly close with. I mean, I am quite enthusiastic with people within my inner social circle but other than that, I tend to keep to myself.

8 June: Had steamboat at Mark’s house with Nyna, Qiya, Regine, Muz and Hariz to celebrate the stopover change (had one in class the previous day as well but I’ll blog about that another time) 😀 even though some of us still weren’t done with Production till few weeks later. 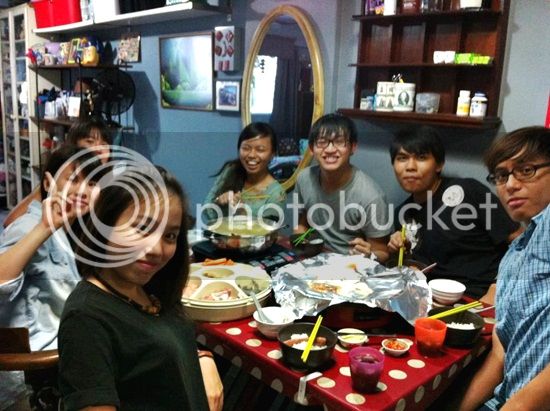 Burned calories by dancing to Dance Central on the Xbox after that! Such immense fun, even though I think I was the stiffest and most awkward dancer there hahaha. They kept telling me to imagine that I’m seducing Ian!! 🙂 One round was Whip My Hair and I whipped my hair till I was giddy…

I think there are videos floating around on Facebook too ehehehe. Anyway, I had a really great time! Thank you Mark’s parents for being such good hosts! They even brought us ice cream while we were dancing halfway 😀

3 July: Most random and impromptu outing ever. Was leaving school with Gerry and somehow the topic of me joining her to watch Spiderman with her cheer friends came up. So I was considering the idea the whole way till MRT, where I couldn’t decide whether to board the Marina Bay train with her or the Jurong East train home.

Chickened out and told her to go ahead. Was on the train back to Khatib and she called to tell me that her friend already bought tickets for me. So I went back in the other directionto meet her at Bishan, then we ran back into the same train to Somerset. If you shadowed me, you’d think I’m insane hahaha.

Gerry was being lovely and linking arms with me the whole time to make sure I didn’t feel awkward/left out/self-conscious, and I love her for that ❤ Second time watching Spiderman and also the one I enjoyed most. Watched it 3x (too sleepy the first time and the third was overkill) in total but I still don’t think it’s as amazing as everyone says.

Ok getting lazy so bye!