Can’t be bothered to hide spoilers so don’t read if you are planning to watch. Won’t explicitly mention names or reveal the killer’s identity but still. You have been warned.

Finished watching Harper’s Island in less than 24 hours awhile back and thought I’d blog about it. Frankly speaking, I was kinda disappointed because I had very high expectations (as usual, but why should I lower them or settle for second best. If everyone raves about it, then it should live up to its hype). I expected something mindblowing like Identity (2003), unforgettable like A Perfect Getaway (2009), and addictive like Vampire Diaries. Unfortunately it was anything but.

Watched it so quickly not cos I was hooked but rather, I wanted to finish everything so that I could remove it from my laptop. Dislike the feeling of clutter on my laptop so I tend to delete everything once I don’t need them anymore. I even stupidly deleted all my schoolwork because I forgot about building a portfolio but nvm.

Gosh I love seeing them, especially the first two ❤_❤

Speaking of which, the show failed to make me particularly attached to any of the characters. I only liked 4 of them. Didn’t like Abby (main female character) very much, even wished she would just leave the island. Only rooted for one couple. Weak character-building that used stereotypes rather than slowly developing the characters. Only the more significant few were given a backstory.

Not enough focus on the island’s history as well. I expected a lot more flashbacks but there were hardly any. It’s always the same one about how 7 years ago, the murders took place. We see all these people whose faces are hardly shown being strung up on the tree, and then it zooms in onto Abby’s dead mother.

If you are going to write a show about the island’s history repeating itself, then shouldn’t you give the audience more insight into the particular history? If you claim that the modus operandi of the murderer is exactly the same 7 years ago and now, then I expect details on the similarities. In present day, people died in so many different ways and yet all I know about 7 years ago is that a bunch of people were strung up on a tree. How is this a copycat murder?

I thought maybe in the final episode when they were about to reveal the killer, Abby or someone would find all her friends strung up on a tree, their fates and bodies finally revealed. At least then there would be a link to 7 years ago, not just the similarity of people dying one by one.

I mean, not all the bodies were discovered even at the end. The characters hardly knew when someone died, they just bought the “returned back to town” or “MIA” excuse. Only when it’s clear that they were the small group left surviving did they assume that everyone else is dead.

Another thing I expected to see was a flashback of how the murderer committed all the killings when his identity was revealed. You know, like in the movies. No such luck. And since there were 2 muderers and so many pranks + accidents, I had to figure out for myself who was the one responsible for this death, which other characters pulled the pranks, and who actually died by accident.

This flashback was like the “make it or break it” moment for me. The moment where I get blown away as we go back to see all the signs and how each murder was carried out. But it didn’t even exist. We didn’t even get to witness the some of the murders. A dead body could suddenly appear in the tunnel. Wow, how did she disapper and when? I guess we will never know. So don’t expect me to buy the story of how the murderer was clever enough to get rid of everybody one by one without being caught if I didn’t get to see it myself.

Most importantly, don’t expect me to buy the murder motive. This was what disappointed me the most. After a reasonably good buildup of 12 episodes, you tell me in the 13th that he did it all for love. That he killed everyone so that she would not have anyone left but him and hence his love will be requited. Is this a joke? I’m not convinced at all. Talk about a weak motive. Understatement of the century in all of murder-verse.

Not even sure if he had a personality disorder of sorts because the trouble he went through just to get the girl is simply unbelievable. If he had any, it definitely only surfaced in the finale episode, trust me.

I thought it was terrible enough that it turned out the first murderer from 7 years ago wasn’t dead at all. No surprise there either. The story kinda went downhill from there when he made his appearance. Ugh his character was just plain redundant. It took away whatever awesomeness the second murderer’s character had since now we know 2 people were behind everything.

Brings me back to point of how the storyline is not very smart at all. Since we didn’t witness every murder, it could be either killer who was responsible for a certain death. Oh, the second killer has an alias? Well, then just take it that the first murderer was behind it. He seems inconspicious? Oh that’s because it wasn’t him, hahahaha. Just NO.

There shouldn’t have been more than one murderer but I guess they can’t achieve that without making the motive and storyline dumber. This is why I say they should have worked more on everybody’s backstory. I wouldn’t mind watching more episodes if it guaranteed a satisfying show.

Of course, there is the character which they used as the “red herring” to throw everyone off the tracks. Okay, I fell for it myself. But I thought it was kinda silly how they didn’t even bother being subtle about it, just shoved it all in your face in one episode. At least put in some effort with foreshadowing if you wanna lead people into believing that this is the murderer.

Not all loose ends were neatly tied up either, leading to a sloppy storyline with plotholes. If you are going to throw a red herring in our faces, then explain the reasons why it’s not actually him. For example, he escapes death on more than one occasion. The first time was apparently because someone traded his life for his. What about the rest?

Ok, maybe the killer is simply a man of his word and promises not to touch the red herring at all. Other than making him the scapegoat. Which is enough reason to keep him alive until the killer’s real identity is revealed. However, it seems really doubtful that he is obviously in the murderer’s way of getting the girl, being her direct love interest for all 13 episodes, but he gets to survive. So you painstakingly plan the murder of 20+ people for this girl, yet leave the biggest threat to your goal alone?

Nothing mentioned about the locals who survived, or the creepy girl staring at Abby from inside the store when she went to collect her scrapbook. Nor the precious little dog who is seen scurrying about here and there. More plotholes, if you are interested [x]

Most annoying and hated character goes to…

Stupid little bitch has to be held responsible for some of the deaths but yet none of the characters even blamed her and her idiotic mom kept shielding her. Not only does she get really spooky at times, breaks precious china and then claims it wasn’t here like there’s some supernatural element creeping around (there isn’t), but she lies and hides the truth for goodness knows what reason. Hence rescue was delayed for some characters, indirectly causing their death. If it weren’t for her, the rest probably could have figured out the truth quickly. But she still keeps lying!!!!

Stupid little shithead, I hate her. Funny thing is the useless and annoying people survived, while my favourite characters got the worst of the lot and died really heartbreaking deaths. I think she’s the most universally hated character on the show despite her young age. I don’t sympathise with her at all.

Favourite thing about the show… 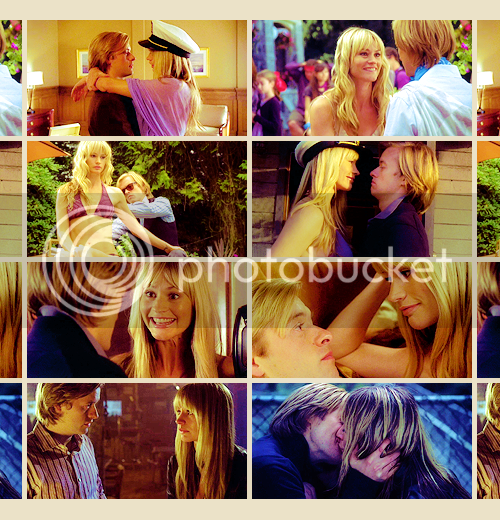 Love all their scenes together, it’s like they are the only thing that made sense on the whole show. At first, we all thought Chloe (the only likeable female character, tbh) was this flirty bimbo who didn’t care much for Cal but it turned out we were wrong and it’s apparent she cared very much about him. As the show went no, their relationship grew stronger.

A strong, non-wishy-washy, outgoing female who knew very well what she wanted (if it were me, I probably wouldn’t be able to choose between Cal and Sully hahaha), and her “cute little Englishman (oh, that accent)“. Love how they pranked Sully with feathers, love how they sntached their ring back in the bar, love how he told her to keep the ring for him because he had something to ask her when he returned, love how he was so determined to save her, etc. Every scene with them is either funny or emotional.

Their presence brightened up the whole show; the heart and soul of Harper’s Island. For me, anyway. 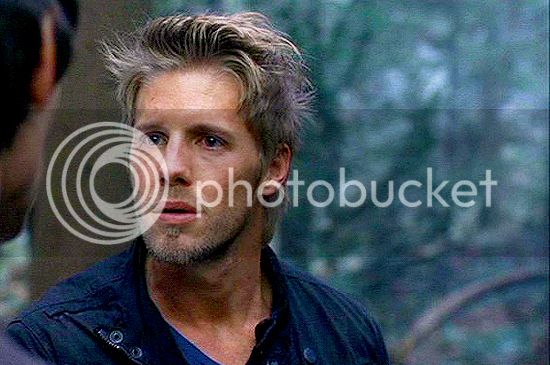 Your face, baby. Your face. That moment when disbelief, betrayal, hurt and realisation flashes across your face all at once. You got stabbed in the back, literally and figuratively. One of the best characters in the show who slowly stole the show. If Chloe and Cal’s deaths were painful, yours ripped my heart out, trampled all over it and then shoved it back down my throat. Thank you for being so kickass and righteous and loyal.

Cons in a nutshell:

As a murder thriller, the cons definitely outweighed the pros. Just as well that it’s only 13 episodes. I would hate being strung along even futher for such a crappy ending. Honestly, if would be so much better if the murder motive was different. It could have gone so many ways!

Can’t believe this turned out so long, critical and harsh. The more I wrote, the more flaws I noticed. I haven’t even read reviews on other sites to see what other people thought. But seeing that I rated the show a 7/10 on IMDb after finishing it, it’s definitely not all that bad for a mini TV series. It was entertaining and I didn’t not enjoy it 🙂

Amazed at the time I spent writing this and editing all the pictures looool
Can I just marry Sully already. Or Jimmy. Shhh don’t tell Damon.

One Reply to “Harper’s Island”