In all seriousness, I cannot take Michael Bay seriously.
Not because I hate him but because I find him funny… in a facepalm kind of way.

Prior to Transformers 4, the only film of his (director only) I’d watched was The Island (2005) with Ewan McGregor and Scarlett Johansson. Which I really liked because of the interesting and engaging storyline. I even cried at the end because the final scene was so moving and I even rated it a 8 on IMDB.

The only thing that bothered me was the second half of the movie, where there were too many explosions. Not even action or fighting, but irrelevant explosions all over. It turned a sci-fi film into an action film so I felt like I was watching 2 movies instead. Which is quite a pity.

And then I realised that explosions were Michael Bay’s trademark and style.

Watched Transformers 4 yesterday (never watched the other 3 though) and it was surprisingly not bad. Maybe because I had low expectations. Yeah it was a usual Michael Bay mess of action and explosions (many of which were eerily similar to The Island e.g. the spaceships even move in the same way) but what else would you expect from a film about robots?

A lot of obvious and irrelevant product placements as well and I can go on about its demerits but why. I didn’t enter the theatre expecting to see an intellectual movie. I wanted to be entertained.

And entertained I was. In fact I was gleeful that the movie was nearly 3 hours long. Which is saying quite a lot since my attention span is barely there and I fall asleep all the time. A good popcorn movie that made my money’s worth.

Anyway, back to my topic on why I can’t take Michael Bay seriously.

1. His response to haters 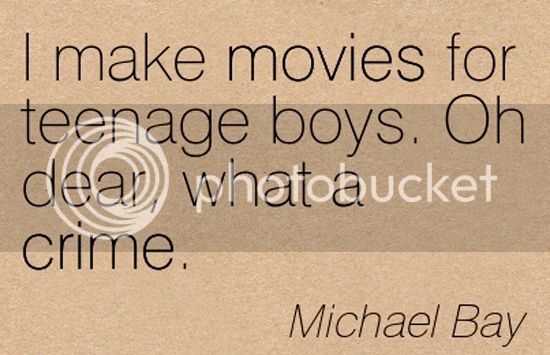 In response to all the criticism about him, this is his response. And let’s be honest. It’s funny and witty and enough. Plus he actually has a point. It’s his choice what kind of movies he wants to make, and it’s his choice if he wants to be criticised (honestly though those critics never shut up about anything).

The most important thing is HE MAKES MONEY. Loads of it. In fact, Transformers is one of the highest-grossing film series of all-time with just the first 3 films (as opposed to Harry Potter’s 8 or Marvel Universe’s 9). And Age Of Extinction is making shit load of money. Still is. According to Guardian, it is already China’s highest grossing film of ALL TIME despite having only been released for 10 days.

Let’s admit it — financial success is still success. Just like how bad rep is still reputation.

2. His meltdown on stage at a Samsung event

This just cracked me up so badly. Apparently there was a glitch with his teleprompter. At the 0:40 mark, he starts to lose it. Then he makes the best sigh ever which I will never forget. I feel your frustration!

He recovers soon enough but goes off again at 1:00. Then he simply says, “Excuse me, I’m sorry” and walks off, leading to a very awkward silence. I just find the whole saga epic and fun to watch. Anyway, he responded to the incident afterwards:

“Wow! I just embarrassed myself at CES – I was about to speak for Samsung for this awesome Curved 105-inch UHD TV. I rarely lend my name to any products, but this one is just stellar. I got so excited to talk, that I skipped over the Exec VP’s intro line and then the teleprompter got lost. Then the prompter went up and down – then I walked off. I guess live shows aren’t my thing.”

3. His response to those who dislike Transformers 4

I had pretty much gotten over being amused by him until this article came up and got me going again. Thus inspiring this post which I can’t decide if it’s making fun of him or defending him. Neither, I guess.

Gotta admire his spirit and positivity.
Quoting Mean Girls, don’t ever let the haters stop you from doing your thang!

Still in Bangkok but I’m prepared hehehe 🙂 Here are snippets of conversations I’ve had in my head for awhile because I like them so much :3 Unloading them here plus these are things I’d want to shelf away for memory’s sake in the future.

*talking about bunbunmakeuptips and her breakout incident at work*

Me: Actually I find her quite pretty.
Kenneth: Are you sure?
Me: Ya, with makeup pretty, without is okay, but now no la.
Kenneth: Huh serious? I think you look nicer.

I was totally like this picture in my head hahaha. Sigh but I was also thinking, “Maybe… if I was thinner’.

I wish I could believe you but I am so not anywhere near an 8!

*Talking about BCG injection in the past*

Someone: Actually what do they inject you with? Some virus?
Me: World War Z…
Kumar: Stop watching so many movies.

HAHA I am proud of all the movies I can reference and quote okay 😀 After all, how can I let all those time spent watching movies be in vain? Once someone mentioned a movie I’d watched and Huimin said, “She (me) always becomes like that (fangirl mode: eyes light up, animated voice, etc) when talking about movies.“ ^^

Meredith: I want to lose 10kg.
Me: Me too.
Everyone: What?! But if you lose 10kg, you’ll only be XXXkg!
Me: But isn’t that the point…?
Kumar: Cherlynn you trying to promote anorexia?

I know it’s stupid but it makes me happy to know that people think I look fine (because I don’t) enough to be anorexic if I lose more weight. Sorry that 3 of these snippets are about my looks/weight hahaha I’m so depressing and shallow 🙁

You You: I can smell the fifth one already.
Me: Same! it’s not even that nice but we know we are gonna watch it anyway.
You You: Why do they keep making the movies ah?
Me: Because there are people like us.

Promoter: Buy give your wife.

*Another trip to JB, buying tickets for The Conjuring*

I don’t even have a reply to any of these… I am so not old okay?!

Me: Like this annoying guy… keep buying me things even though I said I don’t want them.
David: You don’t want, just keep and give me. Say you stress and want to smoke, ask him buy you cigarettes then give me.
Me: *continuing with rant* I just relented and gave him money because I don’t wanna take his things for nothing.
David: Don’t need give him money, save the money and treat me to movies.
Me: Then he said. ‘It’s ok, you just owe me dinner’. (which brings me back to the point of my complaint)
Me: *sudden realisation* Eh if I give you the gifts I receive… it’s like you are my pimp.