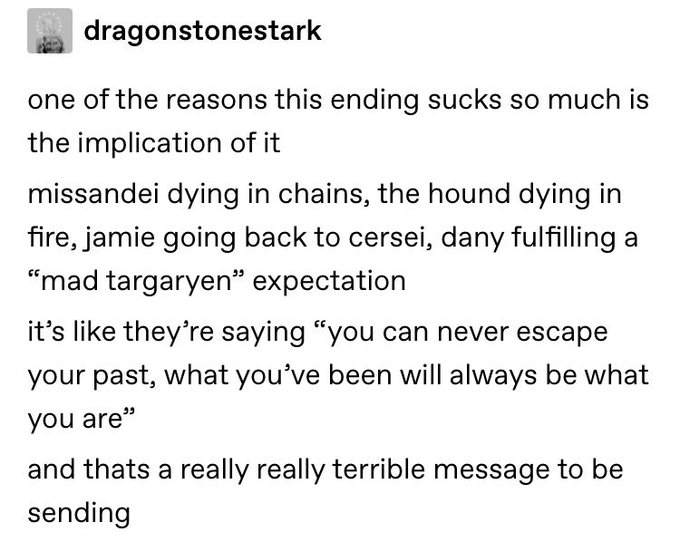 I feel good today. And I want to stop feeling bad and guilty and ashamed over something that’s not entirely my fault or my own doing to begin with, especially when there’s nothing I can do but wait it out and hope for the best. Especially when my feelings are not being considered, so I should be selfish and just focus on myself too.

Hopefully this positive vibe lasts… maybe it’s because I went to the gym today and had a rather long run. Was rewatching Game of Thrones scenes on the treadmill and I got reminded of how the show helped me to be strong at a time when I really needed it.

I meant to tweet this (sometime in 2016 when Season 6 was airing) but never did and it’s been sitting in my drafts ever since. But it’s really more than just a show to me because it has taught and inspired me so, so much.

Rewatching Daenerys destroy all her enemies and Cersei blow up the city today reminded me of the strong female like them that I’m supposed to be. How could I have forgotten and allowed other people to make me feel bad about myself? I got carried away, let my guard down and made myself vulnerable once more… but never again.

Anyway, I wonder at what point will I finally stop this fixation with being thin??? I don’t think I have been this weight since my school days and yet I still don’t feel like it’s enough. And I get the feeling that I’ll never be satisfied.

Also, I realised that it’s very easy to not eat when your mood is shitty and you have no appetite. As compared to exercising all your willpower and discipline to starve. For the past few days, I’ve been eating only one meal a day but I can’t even finish my food.

Today I was at Toast Box and wanted to get toast because I planned on going to the gym instead of eating lunch. While queuing, I Googled how many calories there would be in butter toast (I don’t like kaya or peanut butter which are healthier alternatives).

Walao I was so horrified upon seeing this (especially the butter part) that I decided not to order it at all and just got tea (coffee is my toxic bff lol). I wish I could stop obsessing over numbers (calories, weight etc) but I can’t help it.

I was also telling Farah that I feel like my hair is thinning because it keeps dropping but her hair looks very thick and nice. Then she said actually she drops a lot of hair and that mine looks thick to her HAHAHA. So I get that a lot of it is really just in my head… but how do you stop compulsive behaviour?

But it’s ok I’m a work in progress and one day at a time ok. I think I’ve got exercise and diet down fine, but it’s sleep which I’ve always had a problem with. Now my new rule is lights out before midnight, so that I’ll sleep earlier, and I’ve been trying to follow it.

You know, as much as I whine and wallow sometimes, I do like my life. Crazy and messy it might be, but at least it’s never boring and I do like living.