So you might noticed I randomly disappeared again after a string of consistent updates hehe -_- Madness, August is over!! Which means I’m back at work and yesterday was my first day even though I’ve already been here a year 😛

Gonna just make a quick update of what I’ve been busy with during my one month holiday. First week was basically just slacking around in my world of fiction, second week was spent nursing my guinea pig, third week was spent in Bangkok and I’ll be sharing mostly about the fourth here.

Went back to office last Friday (30 Aug) to give out my Bangkok gifts and also because it was Hui Min and Meredith’s last day! Mini 3-way celebration with sushi, cupcakes, and laughter. So delish!! 😀

I missed this place… best bunch of people ever. Been nervous about doing Lollipop/MYP/night/weekend shifts but they have been so reassuring and patiently showing me the ropes.
Following photos from Meredith’s instagram! 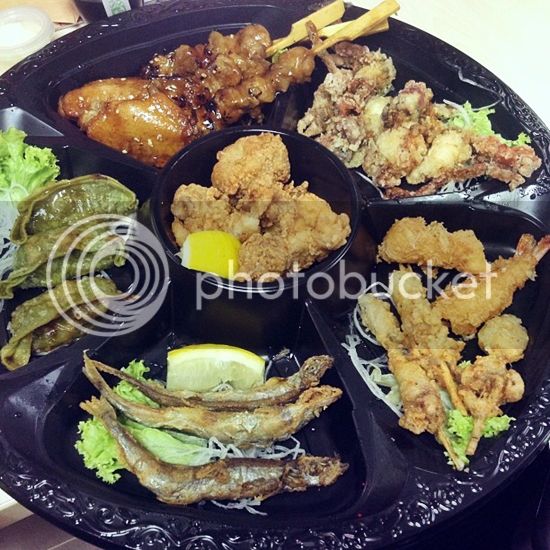 Anyway, first thing Editor asked when I came into office was if I dyed my hair and we were all very impressed with how observant he was hahaha.

Hope everyone liked the small purses even though it’s nothing much. Was worried that they wouldn’t like the colours. I picked for the girls with their favourite colours/designs in mind (which I got right ^^) and neutral colours for the guys. Kenneth immediately transferred his coins over and said, “Don’t say I never use ah…” hehe yay.

The Kumar Shrine HAHAHA
Would love to see his reaction when he comes back :’D

I’ve spent so much of my time here that it feels like a second home. Can you believe I’ve been part of this small yet awesome team for a year already??? Hope that everything goes well and I’ll be able to overcome all the new challenges coming my way!

Also visited the Laptop General Hospital with my parents one morning to collect mom’s laptop.
What an odd and adorable name.

More random photos of food from the same week:

I’m so proud of this photo. Cup noodles has never looked better. All thanks to my mom’s iPad which I have been using a lot. And not forgetting my mom who made the noodles for me 😛

Mixed vegetables rice from one of my favourite stalls near my house. Been eating it since young ^^
Taken from my phone as you can tell from the drop in quality -_-

My dad always buys us such a wonderful spread of dishes and our favourites regardless of what we are eating. Then his own meal will look so plain compared to ours… same goes for my mom :’) Then we will end up exchanging ingredients so everyone gets everything. I love dinners where everyone is present.

Dinner with You You on Thursday (29 Aug) at Orchard Central’s Maccha House before watching The Purge. Really underrated place, probably because of its location because OC is always so deserted. Furthermore, it was hidden away in the basement. Oh well, I love quiet places with no people.

Love my tasty spicy pork rice! So much meat and the prices are really reasonable. No service or GST charge too! Definitely going back to try all their Matcha desserts which looked so good.

You You’s ramen with the proper Japanese egg 😀

Been busy packing my stuff too so as to make space for my enormous Bangkok haul. Yeah I know, I know, my room is super messy thanks to all my clothes and this is not even my whole wardrobe. Some I’ve bought for more than a year and still have yet to wear while others have only been worn once or twice. Sigh why am I so extravagant?

Thank goodness for this mobile app called Carousell which Hui Min introduced to me.

Simply snap photos of what you wanna sell on your mobile device and upload it here. Then you can meet other buyers/sellers. Best thing is it’s completely free of charge! Good way of getting rid of clothes I don’t want. I’ve sold about 6 items in 3 weeks and made $40+. Much better than just throwing away right?

Just for laughs LOL I love my baby too much. Have removed it though, in case I got reported and suspended. You’re not allowed to sell animals but I’ve seen rabbits, cats, hamsters and even a giant terrapin. Feel so sad for them.

Gave my baby a shower one sunny day the same week :3
Can’t get over how cute guinea pigs are… especially mine!!! 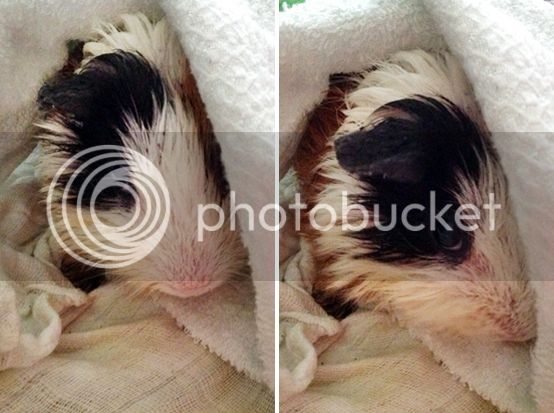 Love her many expressions

Relaxing while drying off. She was such a good girl during the shower that I let her help herself to her favourite food, straight from the bottle 😀 I don’t know why she likes the pellets and stuff so much. We call it her Happy Meal ^^

In a super good mood so far too because Monday went smoothly.

– Completed one Carousell deal
– Fantastic weather as it rained the whole night
– Mom made yakitori for dinner and cheesecake for dessert
– It’s my off day so it feels like I returned to work for only one day
– Yadda yadda and loads more, so much love and gratitude for all I have in life! ❤❤❤

Edit: Oh great! Of all photos in this entry, Facebook/Wordpress picked the fugliest one to use as the thumbnail when sharing the link on my timeline (automatic action)!

So here it is… the announcement I was planning on making. There are two actually, one good and one bad. Neither really concerns anyone else but affects my life greatly so I’m just gonna talk about them here.

1) Signed on full-time at STOMP

Lol did anyone see this coming? I think my mind was already halfway made when I was still a part-timer there… I was just keeping my options open first in case something else came up. Contract ended on 31 July, I took one whole month off as a holiday (since I’ll have plenty of time to work all I want after this), and I’m officially joining again on 2 September 🙂 Signed the contract at the start of July actually.

Meaning  I’ll be there for nearly a year then! Amazing how time flies, isn’t it?? Six months of internship and I immediately continued for another six months without a break. Love how everyone is starting work now and I’m the one on holiday 😛

The only universities I applied to were NUS (FASS) and NTU (Comms, English Literature) but I didn’t get into either, which is fine since I had this backup plan. And I decided that if I were going to a private university instead, I would take at least one year off first for my own reasons.

So yeah I really enjoy this job, so much more than I ever enjoyed poly. People have been nothing but nice to me, plus it has taught and given me so much! Feel so fortunate to be able to get a full-time job there without having to go for any interviews (yuck) though I’m both excited and nervous about returning in September. Because the job scope is a lot wider and with that comes more challenges.

Colleagues love commenting on my choice of wallpapers.
Once I minimised my browser tabs to reveal the screen on the right and someone burst out laughing instantly.

This photo makes it seem like we are all slackers hahaha. But no okay, this is just one of the slower afternoons when it’s approaching 6.30pm. We’re usually mad busy.

With Erin, Vanessa (both interns who have already left) and Sarah 🙂

At this really good Thai food place for lunch!

One time we received a box of Magnum ice cream and a bottle of champagne from PR people too! 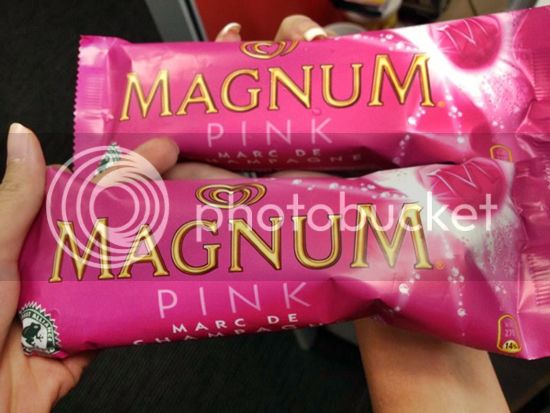 Their new champagne and expresso flavours 😀
Be jelly, people… be very jelly.

LOL thanks for the candid photos, Terence. I look like a pregnant woman who got caught in the act of eating food she shouldn’t. Think the reason is partly because this dress is too big so I always hunch my arms and shoulders in reflex, to keep if from slipping off my shoulders.

One thing I like about working is that it keeps my life routinely organised and I have allocated days to go running at the gym. Usually Mondays and Thursdays though I increased it to three days during my last few weeks. Though I refuse to exercise on Fridays/Saturdays/Sundays because they are meant for relaxing.

Ugh I haven’t gone running at all now that I’m on holiday though, because I feel so unmotivated. I like the gym because everything is there, there’s air con, and they calculate everything for you. Swear I’ll start again when I return to work.

The less people around, the more I like it. Worst is when all the treadmills are occupied and I have to go do something else first. Lol believe it or not, I read fics on my phone while running to pass the time. I know, wtf right? I just place my phone on the treadmill before me and scroll occasionally. Yes, it’s possible and keeps me going. Main reason why I love the gym.

This is like my best record… running for an hour. I amaze myself sometimes.

Went to the Geylang bazaar last Tuesday (6 August) with Xinyi, Huimin and Sarah. My virgin trip! Editor drove us there 🙂 Actually planned to go the week before but we ended up working till 9.30pm and the boss (meaning my editor’s boss) bought everyone KFC for dinner.

I have more photos actually, but will post them another time. Now for the second announcement which I really don’t wish to talk about but will have to face up to anyway, sigh…

2) One of my guinea pigs passed away

The younger one (five and a half years old) died few days back on Saturday, 10 August. It was unwell for the whole week and I had a very bad feeling about this time, all the worst scenarios materialised in my head. Two days of public holidays so I couldn’t get to a vet till Saturday, where I made the most painful decision of my life to euthanize her.

Apparently she had a spinal injury, though I’m not sure how it happened because I didn’t see the furball fall or hurt herself. Add old age (average lifespan of guinea pigs is 5 to 7 years, many don’t make it past 5, and the vet said most local guinea pigs she had come across aren’t older than 6), being overweight, slim chances of recovery, a bumblefoot condition (she had had it for over a year on one front paw and we tried treating it but it didn’t improve, though both her movement and appetite were never affected) and being in extreme pain into the equation.

So I agreed to euthanasia, bawled so hard at the clinic that I had a headache and vomited when I reached home. I still feel like crying everytime I think of her now. She’s buried at the grass patch near some shrubs under my block. I just wish her final days weren’t ones that were spent in pain. Why can’t everyone, human or animal, die peacefully and painlessly in their sleep when their time is up?

Now I’m worried that my remaining guinea pig (six and a half years old) will get depressed over the loss. It happens because guinea pigs are social animals. Thankfully she seems fine and is eating normally, though she seems sad at times.

Mimi, thank you for a wonderful five and a half years together. I hope you were as happy as you made me and that you are in a better place now, where there’s no pain and suffering. I will always miss you ❤