“The best and most beautiful things in the world cannot be seen or even touched. They must be felt with the heart.” – Hellen Keller

2010 has been going well. Not the best, but nevertheless still a blast.

So here are a couple of the things I’ve won online this year, which I find worth sharing.

Around last month, but I only received it recently.
Don’t even need to spend money buying their products or whatsoever, just be among the first 500 to like their Facebook page 😀

Haven’t removed the paper behind because it’s black + hotpink! ♥

They mailed it directly to my house, by the way 😀

Months ago, sorry I’m so slow.
The whole thing was amazing and one of the most pleasant surprises ever.

It all started on Twitter.
I followed Luisa Plaja, author of this book and told her how much I loved her books. Not only did she reply me, she followed me back too! I was sooo happy.

We started talking every now and then 😀
When this new book of hers launched, I congratulated her and the most amazing thing happened.

She offered to send me a copy of her book as a gift to say thanks for all the support! How awesome is that!! ^-^ Thanks to my account being hacked, I lost all the messages from her but ohwell.

One week after I gave her my address….

Omg omg how often do you get something like that happening to you?!

Shipped all the way from UK!
“AIRMAIL” >:D 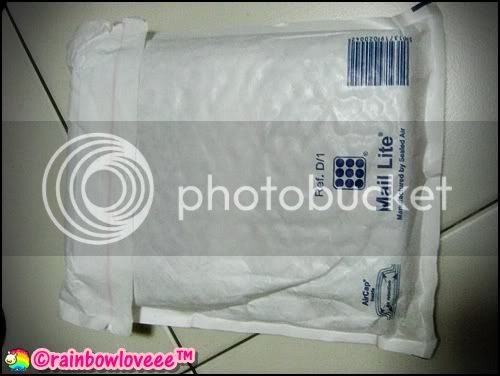 Sorry too excited, must take many pics!!

It’s sent directly from The Book Depository and hence, not signed. If she signed the book then sent it herself, she will have to pay the shipping fee herself too which I guess is too much to ask for.

The receipt thingy, courtesy of TBD -_-
I still keep it, the envelope too. The whole thing is just too splendid and unbelievable lah.

I really love her books ♥♥♥

Hehehe okay enough with the picture spam.
But it’s great isn’t it! I can’t believe I am so lucky!!! 😀
More reasons why I don’t regret joining all these social networking sites, hah!

There is another thing I won – a signed book 😀
Details of the competition here!
Can see my name and Twitter link among the list of winners ^-^

It hasn’t arrived yet because the editor of teentoday hasn’t sent the book. He followed me on Twitter so I know it’s not a scam, and said he will send it as soon as he can.

Can’t wait for that to arrive too 😀
I wonder if I should reveal the winning secret I sent in? Lol.

Like I said, it’s a secret!!!
Maybe I will. Stay tuned.
Yes, another teaser 😀

Finally, after all this while

Finally completed and submitted and everything, vis-a-vis Project Post-its. Okay I am so tired and my head hurts. I will blog more details another day.