Love this fanmade trailer a lot a lot… funny thing is I pictured Mila Kunis and Garrett Hedlund as Johanna and Finnick even before I saw this. Love many of the movies used too! If you’ve seen them, you would understand why I think certain actors are perfect for certain role but alas, did not get what I want.

Haven’t been following any fandoms (not even TVD) because I am kinda giving up on Tumblr plus I don’t have the time. Anyway, TVD hasn’t exactly been fangirl-worthy this season and my feelings towards Hunger Games is a constant plummet.

But somehow the fangirl in me hasn’t died because I still get emotional watching fanvids… yesterday I watched the Hunger Games trailer again and as with previous times, I cried!?!?!!? Damn this love-hate relationship with the series. Not exactly satisfied with the books and first movie but I’m excited for Catching Fire in November this year.

So now we know the whipping scene is going to be in the movie. I know Gale isn’t exactly everyone’s favourite character which makes me love and want to protect and defend him even more. I loved him from start to end okay fuck you all haters and Suzanne Collins {;_;} Want the field scene to be included so badly even thought I might die.

“Gale is mine. I am his. Anything else is unthinkable.”
[Highly doubt this will be in the movie because they are portraying Katniss and Everlark in such a positive light]

And my favourite still… 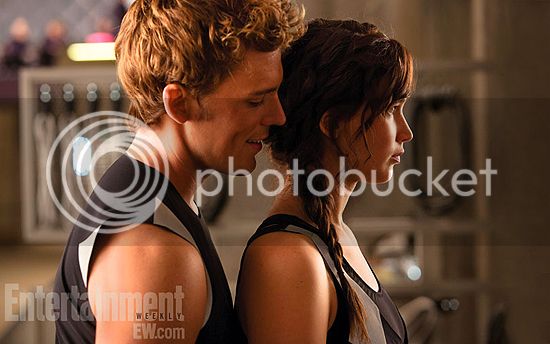 Whew, it suddenly got hot in here.
I WANT A SUGAR CUBE

I just hope he does a good job playing Finnick because he isn’t exactly what I pictured, appearance-wise. Stupid as it sounds, the only words that can adequately describe Finnick is perfection. He’s supposed to be hot, handsome, sexy, charming, flirty with a rugged, roughed up look after all he’s been through… or is it just me? Aiya idk, after all he looks great enough in that still so I hope the trailer doesn’t disappoint!