Forgot to upload pictures yesterday because I got carried away with all my rants! Hahah anw, you’ll probably end up laughing like crazy because the photos are all crazy 😀

They were taken yesterday with my laptop’s webcam because we got bored whilst waiting for the lecturer… who never turned up. All with different effects… the distortions are the craziest lol! 😀 I think I look awful but ohwell…

Darilene, Cherlynn, Geraldine! 😀
This picture the lines is the effect, not bad quality!

My face damn big like that 🙁
Behind got another row of tables, can’t move back…

I think I should do this more often because it makes my face look smaller! ^-^ HAHAHAHAH

Hallow, I ish ET from Mars! 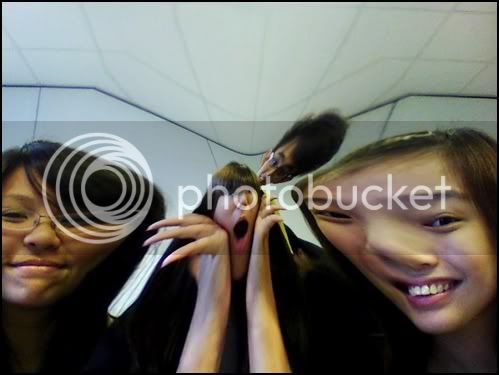 I LOVE THE ONE BELOW BEST……

Looks like a horror movie scene. I kept wanting to laugh and had to endure till the picture was taken! You see my mouth not so big because I started to laugh liao… Actually I open damn big HAHAHA

Geraldine wants to crush our heads ._.
Then tried to take the series shots but epic fail… don’t know what we posing also hahah!

Insane shots huh?
But I had such a laughhhhh 😀 omg it was so funny!! Silly distortions.

Today nothing special happened… Didn’t walk by the Acer area HAHAH. Tutorial was interesting. I like the lecturer for this module, he’s so funny and engaging!!! You won’t feel bored 😀

Had to do self-introductions and the questions were:

I said I don’t have a favourite… but I like horror movies and he asked which one was my favourite then. I said “House Of Wax. I have watched it ten over times but I still wanna watch it. Just love it very much. It’s my ultimate favourite movie!” And he was like, “What’s wrong with you, girl???”

You all should watch it!!! Such and awesome movie and I love the male and & female leads. Got Paris Hilton as supporting role -_-

LOL very funny! 😀 make me keep laughing. Then for my answer to the second question, it happened to be a horror movie also! Day Of The Dead which I watched on Star Movies last night. He was like O___O and I keep wanting to laugh .___.

Fun session. Because a lot of people’s answers very funny also, not just mine 😀

Tomorrow’s module is Scriptwriting, 2 hours only!! :)))))
Other tutorials for the day cancelled. YAYNESS!

0 Replies to “Webcamwhoring during class”